Russia’s Omichka OMSK downed VC WEERT in straight sets for the second time in just seven days to advance to the 1/4 finals of the 2012 CEV Volleyball Challenge Cup – Women. Omichka scored on Tuesday afternoon a speedy 3:0 (25-14, 25-20, 25-16) to edge the team that is currently ranked first in the Dutch national league. 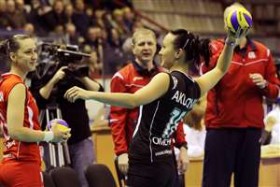 Omichka OMSK outclasses VC WEERT to make it to quarterfinals

The next opponent for the girls from Siberia’s second largest city will be the winner of the clash starring Baki BAKU and ZOK RIJEKA.

The young players from the Netherlands could not do much against the great blocks and spikes displayed by Omichka, whose head coach Vladimir Kuzyutkin lined up for this return match Nelli Alisheva, Alena Yurieva, Olga Zhitova, Aleksandra Korukovets, Tatyana Belkova and Ekaterina Orlova. VC WEERT could move ahead in the score only in the opening of the second set but OMSK fought back quickly to control the operations until the end of the game.

“I think none in the sports hall was afraid about the final outcome of this match” says Kuzyutkin. “I am satisfied with the attitude and approach showed by my players but not with the quality of their play, especially because our opponent did not cause any real problems to us. My attention is more devoted to the next round of the national league where we’ll play Severstal CHEREPOVETS and we have to win to continue our campaign in the Playoffs. Our next opponent in the Challenge Cup will most probably be Baki BAKU; we’ll try to take these matches easy so that we can display some good Volleyball” he concludes.

“We did not have any chances this time” admits the head coach of VC WEERT, Fred Hermans. “I could see 6 great players in action on the other side of the net”.

Argentina: The four teams were highlighted in the individual games in the third Grand Prix of the tournament

Argentina: We present you “Bia” Souza, the new reinforcement of San Martin de Formosa for the rest of the year