Baku, Azerbaijan, February 9, 2012. Azerrail BAKU booked on Wednesday a place in the 1/4 finals of the 2012 CEV Volleyball Champions League after downing Volero ZÜRICH in straight sets (25-17, 25-18, 25-14), the result fairly showing the absolute dominance of the home side in that second clash with the Swiss national champions. 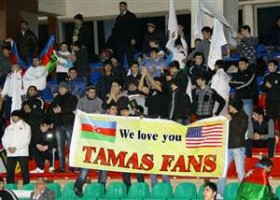 US American Heather Bown also chiefly contributed to this win by displaying a very solid performance in defense and attack.

Even though Baku is experiencing the coldest winter in the past 50 years, still 1’000 fans were in attendance, including a special group of supporters who showed their passion for US American Jennifer Tamas (see picture).

“Today we scored a good win but I think we have to play even better to make it to the final four. Many thanks to the fans who challenged the low temperature to come here and cheer on us” said Tamas looking forward to the next round where Azerrail plays the winner of the clash starring Dinamo KAZAN and DRESDNER SC.