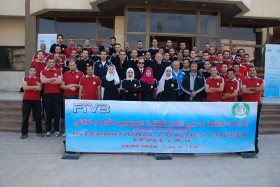 The two events were running concurrently, with both beginning on January 23.

The Level I course, directed by Egypt’s Sherif El Shemerly, was attended by 34 people while Bulgaria’s Jivko Jetchev directed the Level II event which had 27 participants.

The closing ceremony was attended by Aly El Sergany, president of the Egyptian Volleyball Federation alongside various other members of the Board of Administration.