Macerata forced Cuneo to a Golden Set thanks to a tie-break victory and then won it 16-14 to go through to the Playoffs 6, in which it will meet the holders Trento. 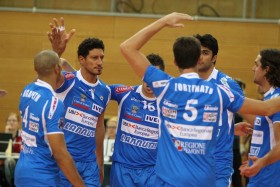 Macerata flew to a 3-0 advantage in the tie-break but Cuneo tied it at 7.

Macerata regained a two-point advantage and at 14 all it seemed over.

But a Mastrangelo mistake on the serve and a Travica block on Wijsmans sent everyone to a Golden Set.

Macerata took a 3-1 then 6-4 lead. Vesely would get Cuneo level at 8-8 but Kovar and Omrcen sent the guests back two ahead.

Cuneo had not said its last word as a Savani block meant it was all square at 13.

Savani obtained a match point for Macerata but Omrcen served out, 14-14.

The second qualification point came on a Mastrangelo serve out.

A Savani ace sent Macerata in the next round.