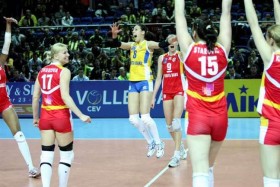 Rabita turns odds around to win at golden set

The match did not start that well for Rabita as Atom Trefl impressed with some great play of US American Megan Hodge, with the side from Poland taking the provisional 1:0 lead (25-21). However, Rabita got back on track with the help of home heroine Natalya Mammadova who did a great job in attack. After taking the second set, the group around head coach Zoran Gajic went on to cruise to a 3:1 win and hence called for the golden set to determine the team advancing to the next round of Europe’s most elitist competition. There Rabita delighted many home fans – who had found their way to the sports hall in spite of very low temperatures, this being the coldest winter in 50 years in Baku – to dominate the scene and seize also the golden set (15-6).

“I am very happy for being part of this victory. We believed in ourselves and together cruised to the win. I have to thank our fans because they helped us a lot” stated Mammadova after the game.

“Our opponent was really strong but they did not maintain the same rhythm for the whole game. On the other hand we delivered a great performance; we needed such a strong opponent to play our best as we did not have any serious match since the end of the year 2011” comments Gajic.