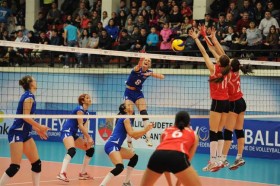 Romania has got only two teams that are still in contention for the European Cups, the other being Tomis CONSTANTA that will be playing Maccabi TEL AVIV of Israel in the 1/4 finals of the 2012 CEV Volleyball Challenge Cup – Men.

The clash with Dinamo does not look that easy for the Romanian champions especially as the return match will be played in Russia. However, the players mentored by head coach Darko Zakoc will have the opportunity to gain some more valuable experience by playing a very solid opponent.

The schedule of the national league was recently disrupted in Romania because of bad weather, with some matches having been postponed and this may be an advantage for the home side as the players have been able to rest for a few days.

Even though the winter season is still ruling there on the shores of the Black Sea, quite many fans are supposed to make it to the sports hall this coming Tuesday to passionately cheer on the home heroines.

SWI F: The results of the weekend