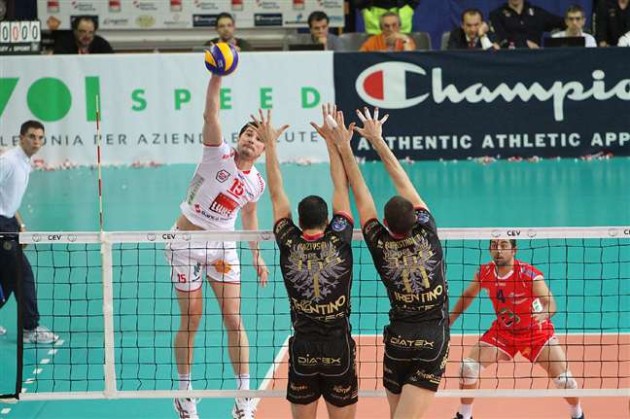 MACERATA comes from behind to edge triple European champions

It was a great game for the home side that stormed back from two sets down to get its revenge for the final of the national cup that was played only this past Sunday in Rome.

The team mentored by Radostin Stoytchev took immediately control of the operations in the opening set helped by the mistakes in attack of home spikers Igor Omrcen (9:11) and Simone Parodi (12:15); the remainder of the set was marked by the very solid performance from the serving line (3 aces) and in attack for TRENTINO (56% of efficiency vs. only 30% for the local guys).

The Czech opposite of TRENTINO PlanetWin, Jan Stokr, stamped a block for the final 25-16. The services of TRENTINO caused many problems to the reception of Lube Banca Marche also in the second set where the guests went up 10:4 as Greek middle blocker Mitar Tzourits was sending out some missiles from the serving area.

On the opposite side, the home players again registered too many mistakes with their serves (7) and nothing changed even when the home coach Alberto Giuliani decided to change the setter, with Natale Monopoli replacing Dragan Travica. TRENTINO PlanetWin went up 22:14 with one more ace of the Cuban-born star Osmany Juantorena; he also was a real killer in attack (100% of efficiency out of six attempts) and his side sealed the set at 25-19.

In the third set MACERATA, with Monopoli still on the court, and also Jiri Kovar for Simone Parodi, quickly claimed a reassuring gap with the services of Igor Omrcen and the blocks of Serbia’s Marko Podrascanin and Dragan Stankovic (8:4, 16:10). The Croatian opposite of Lube Banca Marche, Omrcen, scored 5 points all alone, while spiker Cristian Savani finished it off at 25-18.

The key to complete the comeback was the same in the fourth set: MACERATA took an initial margin with two aces of Savani (9:5), backed up the leadership with the winning blocks of Stankovic (11:6) and Omrcen (15:10), then definitely gained the tie break via the attacks of Savani (6 points) and Kovar (5), who closed it out at 25-22.

In the final set, Igor Omrcen, the best scorer of the home team together with Savani (both finished with 19 points), made the difference with his great service to fire up the home celebrations.

“I must thank my players” said the mentor of Lube Banca Marche, Alberto Giuliani “because tonight they showed their best attitude and great character. We scored an important victory tonight, but the qualification for the final four is still far, because in Trento we are expecting a very difficult battle”.