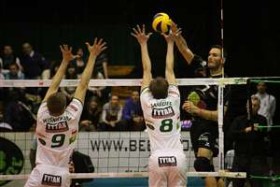 Tytan CZESTOCHOWA is one step away from semifinals

As expected by all observers, the defense was the main asset of the guests from France and even though RENNES went up by 4 in the opening set, the home guys clawed back to 23 all before their rivals took the next couple of rallies.

After losing the opening set, CZESTOCHOWA showed great determination and eventually seized the second set (25-21), before opening set 3 with a massive 7:0 anchored by some great serving of Lukasz Wisniewski.

After dominating the scene there (25-11), the home side continued playing at a very good pace with powerful attacks and a solid defense paving the way for the final 3:1.

Tytan AZS is in a favorable position for the return coming up next week in France where the players of RENNES will eventually have to take also the golden set to make it to the semifinals.