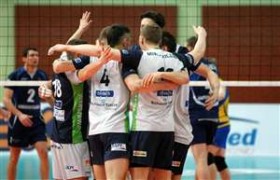 Lokomotyv started strong going up 18:12 in the opening set with solid attacks and blocks, but the home side gradually found momentum to get back on track and eventually pocket set 1 at 31-29.

Pawel Mikolajczak dictated the pace of the game in set 2 for WARSZAWSKA but Lokomotyv was able to fight back with great services of Mykola Rudnytskiy.

The Ukrainian players controlled the game quite comfortably and could eventually go for the provisional 1:1 (25-20).

Lokomotyv opened with a 3:0 mini break in set 3 before Wojciech Zalinski and Mikolajczak drew level at 9 all.

That set was then highly contested and eventually the home fans could celebrate the final 27-25 for the home guys.

Politechnika stormed out to a 6:0 in set 4 and showed great consistency, playing with absolute confidence and could eventually seal the deal (25-19) waiting now for the return game scheduled for next week in Ukraine.