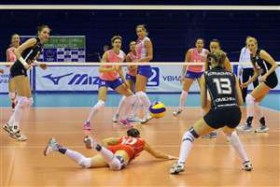 Home win for Omichka OMSK waiting for return in Baku

Baki BAKU is a multi-national side where only two local players from Azerbaijan are included in the roster, the remaining ones having moved to Baku from Italy, Brazil, Croatia, the Netherlands and the United States.

Omichka started well by taking the opening set as the attacks of Baki were regularly stopped by the blocks of Alena Yurieva, while some excellent spikes of Nelli Alisheva, Maryna Marchenko and Aleksandra Korukovets sealed the final 25-20. Omichka got a margin of several points in the next two sets but Baki reacted with great defense and punished the home ladies twice after very close final runs (25-27, 27-29). Raffaella Calloni and Renata Colombo anchored Baki BAKU in set 4 but Omichka responded well with Alena Yurieva calling for the deciding tie-break (25-22).

This season Omichka had already won seven out of nine tie-breaks and that good ratio was improved tonight as OMSK dominated the scene there and could celebrate its win by sealing the deal at 15-11, waiting for the return scheduled for next February 28 in Baku.

“I have to congratulate our opponents on their win. It was a good game and of course we hoped to finish it with a different result. However, it is not easy to play such a tall team that always displays powerful attacks and a good defense. We need to work out a strategy to seize the night in Baku” said the head coach of Baki, Angelo Vercesi, at the end of the game.

“I think it was a nice game for the spectators as they attended a match with many turnarounds and saw a real fight on the court” stressed home mentor Vladimir Kuzyutkin. “We shall have played better in blocking and in defense. I am always proud of our discipline but today I can’t be totally. We knew our opponent pretty well but could not exploit their weaknesses; we hope to do so next week in Baku”.