Argentinean head coach Jorge Cannestracci celebrated a memorable comeback at the helm of Romania’s Tomis CONSTANTA as his side easily downed Maccabi TEL AVIV of Israel in straight sets (25-20, 25-23, 25-23) in the first round of 1/4 finals play for the 2012 CEV Volleyball Challenge Cup – Men. 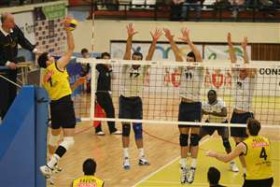 Tomis started well going up 8:7 and 16:11 at the mandatory stops of the opening set with Philip Maiyo, Blanco and Torcello displaying some great attacks and blocks. Maccabi got closer (21:19) but the home side stayed cool to pocket the opening set (25-20).

After Tomis had initially dictated the pace (8:6), Maccabi TEL AVIV stormed back in set 2 by taking the lead (13:16) before the home guys drew level at 17. The guests from Israel were up again (20:22) but a series of great defenses and four consecutive points eventually turned the tables around with Tomis claiming the provisional 2:0 (25-23).

Tomis trailed for most of the time in the third set (3:8, 12:16) before setter Blanco anchored his side back (17:16). However, some more errors of the Romanian guys paved the way with gold for Maccabi (17:21) before Voinea leveled again with three great services. Two blocks of Everaldo called for a couple of match balls and Dragos Pavel finished it off at 25-23 for the final 3:0.

“We did not display our best play but it will be a different story in Tel Aviv, where we hope to win the return game and go for the golden set” stated Maccabi head coach Zohar Bar Netzer.

“I am happy because I had left Tomis after winning the national league some years ago and tonight celebrated my comeback with a win” said Tomis mentor Cannestracci. “We still have a lot of work to do”. “It was a great win but this is not enough, as we must win also in Tel Aviv next week in order to advance to the semifinals” concluded local captain Radu Began.