With a superb performance Russia’s Dinamo KAZAN claimed the home match with Azerrail BAKU scheduled for the 1/4 finals of the 2012 CEV Volleyball Champions League by displaying some great blocks and attacks to finish it off with the score of 3:1 (22-25, 25-23, 25-22, 25-21). 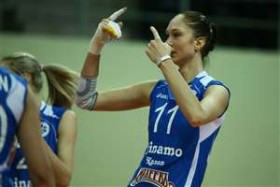 Actually the match did not start that well for Dinamo as the ladies from Tatarstan did regularly trail in the opening set (16:20) before the blocks of Maria Borisenko contributed a deuce at 20 all. As for the guests, Polina Rahimova was just outstanding but actually that section of the game was sealed by three errors of US American Jordan Larson, one of the stars included in the roster of Dinamo (22-25).

In set 2 Azerrail showed some problems in reception while Irina Kuznetsova aced twice to open the gap from 8:7 to 13:7. The home side maintained a very narrow margin while approaching the end of the set (21:20) and eventually went for the 1:1.
Dinamo KAZAN caught a fantastic start in set 3 (8:1) with the service of Borisenko and the spikes of Ekaterina Gamova; however, anchored by Karolina Kosek, Azerrail clawed back to 22:21 before Gamova pocketed the 2:1 for her side.

Even though she is one of the best scorers in this year’s Champions League, Polina Rahimova was just unable to cope with the Russian block. Dinamo went up 18:16 in set 4 by profiting of her errors and even though Azerrail fought until the end, Gamova sealed the deal finishing the match as top scorer with 26 points.

“I am proud of my players because they showed a great attitude and approach in this game even though it was difficult for us to stand the powerful attacks of Azerrail” said home coach Rishat Gilyazutdinov in the end. “It was a tough match and our reception was poor, so we provided our opponents with a good chance to break away. However, this is not the end yet and we will fight in Baku to qualify for the final four” added Azerrail mentor Faig Garayev.