Schwerin, Germany, February 26, 2012. Germany’s SCHWERINER SC delivered a superb performance this past Thursday in Italy losing only at the tie-break to the local heroines of Yamamay BUSTO ARSIZIO in the first match scheduled for the Challenge Round of the 2012 CEV Volleyball Cup. 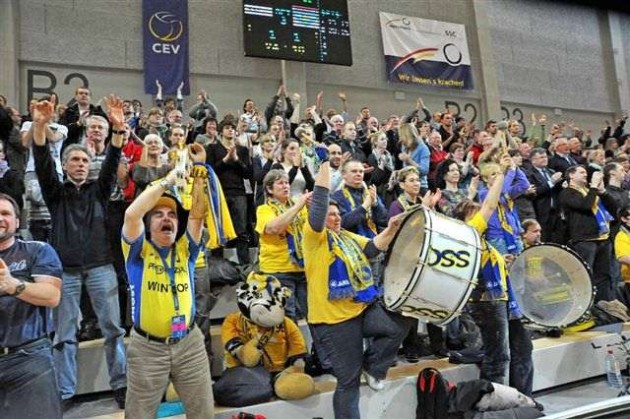 SCHWERINER SC believe in their chances to stop Italian heavyweight

The remake scheduled for Tuesday at “Sport- und Kongresshalle” in Schwerin is hence drawing much attention as the provisional leaders of the Italian national league will have to score another win to make it to the semis and avoid the so-called golden set.

After coming down from the prelims of the 2012 CEV Volleyball Champions League, the German team around head coach Teun Buijs still has got the opportunity to prolong its European campaign.

SCHWERINER SC is getting ready for that home clash with the intention to contend a pass to the semis by exploiting the golden set rule.

Even though the home team may be seen as the underdog in this clash, still last week the Germans demonstrated that they can keep it up with the best sides in Europe.

SCHWERINER SC extended the first match to the tie-break and surrendered only after 111 minutes of great play, with Yamamay anchored by French spiker Christina Bauer.

This is also the last stop for SCHWERINER SC before playing Rote Raben VILSBIBURG next Sunday in Halle/Westfalen with Germany’s national cup being at stake in front of a crowd of 10’000 Volleyball fans.