With the last round of the Playoffs completed on Thursday night, the draws for the final four tournaments of the 2012 CEV Volleyball Champions League were eventually determined. 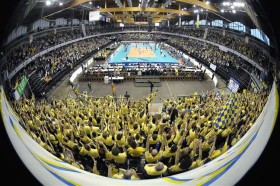 The men’s trophy will be at stake in Lodz this coming March 17-18 with the three-time champions of TRENTINO PlanetWin365 playing there Zenit KAZAN in the semis for what is a remake of last year’s final match. On the other hand, the hosts of PGE Skra BELCHATOW will open their quest for international glory by testing out the likes of Turkey’s sensation Arkas IZMIR.
As for the ladies whose final four is scheduled for March 24-25 in Baku, Azerbaijan, the 2010 club world champions of Fenerbahce Universal ISTANBUL will be playing in the semis Russia’s giant Dinamo KAZAN while France’s RC CANNES and MC-Carnaghi VILLA CORTESE of Italy will be crossing their ways again after playing a couple of hard-fought matches in the prelims of this year’s CEV Volleyball Champions League.

A detailed match schedule with all starting times will follow soon, but all pre-conditions are set for two splendid weekends along with the best Volleyball players in the world!