The Dominican Republic capital of Santo Domingo will host Pool A of the FIVB Volleyball World League 2012 from June 15 to 17 after original hosts Cuba announced that the Havana Sports City Coliseum – the original venue for the second round – will not be completed in time for the premier annual men’s volleyball tournament. 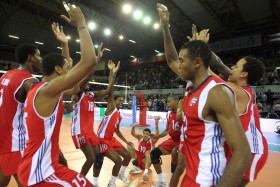 For the first time in the event’s history, which dates back to 1990, all four teams in each pool will play a host city on a weekend, with each country taking turns to host all four teams in their respective pools.

Cuba will now take on defending champions Russia, Serbia and Japan in Santo Domingo – with the support of both the Volleyball Federation of Dominican Republic and NORCECA – as they look to win their first World League title since 1998.

The world No.5 played all of their matches away from home on the way to finishing eighth in last year’s competition due to restorations to the Coliseum which began in 2011. The hall was originally expected to be ready in time for this year’s tournament, which runs from May 18 to July 8.

The four pool winners and the best runner up will join hosts Bulgaria in the Finals, set to take place in Sofia from July 4 to 8, with the six teams (reduced from eight in 2011) split into two pools. The top two teams from each pool will advance to the semifinals.