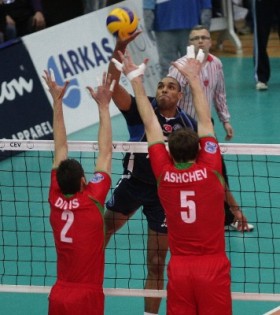 With 40 points of Colombian Agamez, Arkas Izmir of the coach Glenn Hoag, subverts all the predictions of the vigil, 0:3 of the first round and becomes the first Turkish team to reach Final Four in the Champions League.
In the semifinals it will play on the court of Skra Belchatow. Next to Agamez is the former player of Piacenza, Bravo (20 points).

In Lokomotiv Novosibirsk the exceptions were Millar and Biryukov (23 points with 50% in attack in 6 sets).

1. Set: Lokomotiv took advantage of 2:3 points thanks to 3 points from the counterattack of Sanchez. It won the first set with the difference of 2 points.

2. Set: Lokomotiv was forward only a point to the second technical timeout, but then the ace of Zhilin (16:19) and the counterattack of Sanchez led to 16:20. With the excellent playing of Biryukov Lokomotiv won with 18:25.

Golden Set: Arkas Izmir took the lead with 6 points of Agamez and defeated Lokomotiv Novosibirsk with 15:11.