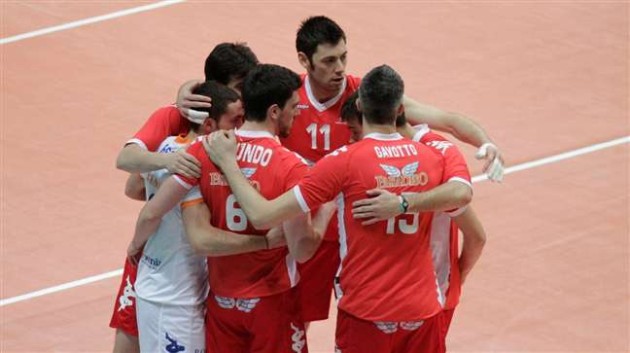 With some 1’500 spectators in attendance at “Palaiper” Dinamo started strong claiming a margin of 2-3 points for most of the opening set and even though the hosts were able to draw level a couple of times, still Dinamo finished it off at 23-25.

In set 2 MONZA was evidently more focused and played with good consistency to go for the provisional 1:1 (25-21) before setting the pace also in the third being able there to stop a dangerous comeback of the Muscovites (25-22).

Dinamo nevertheless did not give up and called for the tie-break where the teams played point for point until MONZA got a mini break that was eventually maintained up to the final 15-12.

“Our opponents were really strong tonight and they were able to cause us quite many problems” says local hero Marco Molteni. “I think we deserved to win this game as we displayed a good and consistent performance and maybe the many tie-breaks we recently had in domestic competitions helped us tonight cope with such a long and hard-fought match”.

Facundo Conte paced Acqua Paradiso MONZA with 23 points with Mauro Gavotto and Milos Nikic adding 17 apiece while Peter Veres and Nikolay Pavlov were the top scorers for Dinamo with 22 and 21 points respectively.