The two remaining teams for play off could be resolved on Thursday when PSM Voley receives Drean Bolivar and Boca Rio Uruguay Seguros meets with Buenos Aires Unidos. Moreover, in the third match of the series, Lechuzas Villa Maria will face Ciclista Olimpico that must win to keep the possibility of raising its position on the scoreboard. 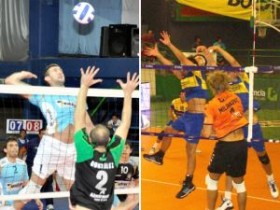 From 21.30h, PSM will have a great volleyball match against Drean Bolivar.

In fact PSM could become the first team to defeat  the leader after qualifying on 8. place.

The hosts could not handle Mar del Plata on Tuesday and are now down in the series.

Finally, for a place in the Liga Argentina Native Card Nation, Lechuzas Villa Maria will play against Ciclista Olimpico in “Vicente Rosales,” from 21.30h.

The team led by Paul Del Grecco took two victories at home and is staying in one of the most important category of the national volleyball.