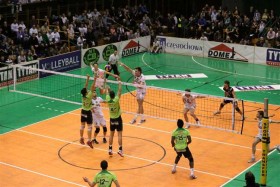 The match was extremely balanced with the hosts going up by one and three points at the technical time-outs of the opening set before they gradually widened the gap to clip the final 25-18. Prefaxis MENEN reacted very well in the second set keeping a margin of two points for most of the time and home coach Marek Kardos was forced to ask for a time-out as his side was trailing 16:21. However, this did not help much as MENEN could finish it off at 20-25.

Tytan AZS CZESTOCHOWA got back on track in set 3 with great services of Lukasz Wisniewski, strong spikes killed by Michal Kaminski and the excellent blocks stamped by Wojciech Sobala. The game was really one-sided in that section and the home guys could go for a comfortable and quick 25-15.