Suhl, Germany, March 14, 2012. VfB 91 SUHL of Germany lost on Wednesday in straight sets to Baki BAKU (24-26, 19-25, 21-25) the first semifinal match of the 2012 CEV Volleyball Challenge Cup – Women. A crowd of 2’000 fans contributed a great atmosphere for what was one of the most important nights in the history of the German club but eventually the players of head coach Felix Koslowski could not celebrate another triumph in this already memorable season. 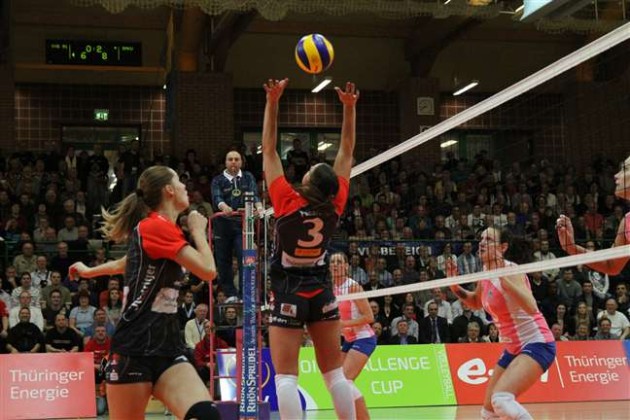 Like in the 1/4 finals with Iller Bankasi ANKARA, the opening set was the deciding moment of the match, but this time with no happy end for the home side.

After coming back from 7 points down, VfB 91 SUHL was able to draw the score but eventually Baki scored the last couple of rallies to seal the deal at 24-26.

The third set was tight up to 17 all but finally Baki sped up the pace to finish it job in straight sets.

Both head coaches agreed that the game was marked by many errors from both sides but still some excellent Volleyball was to be seen on the court.

“I am happy with the way my players were able to cope with this crazy atmosphere in the sports hall and that they did stick to our plans” says Baki BAKU mentor, Brazilian Angelo Vercesi.

“We currently have some problems with players that are not fully fit but in the end tonight we committed a way too many mistakes” adds home leader Felix Koslowski. “You cannot afford this as you play a strong and experienced side like Baki BAKU. However, we still have our own chances to make it to the final” he concludes.

ITA A1: Padova adds Hein to its roster