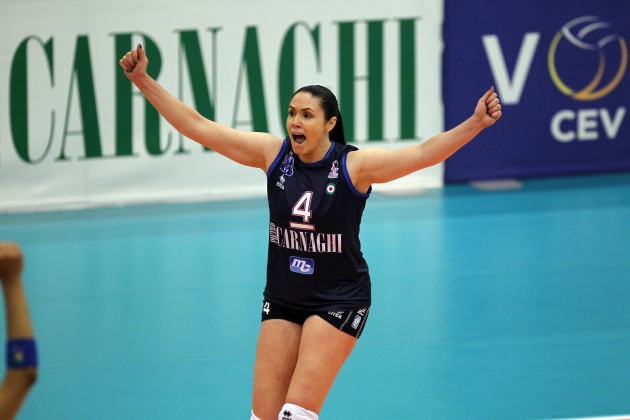 After losing their opening matches to RC CANNES and Eczacibasi respectively, this round was extremely important for both sides in order to maintain good chances to make it out of the Pool play.

SCHWERINER SC started very well with some tricky serving that sparked problems across the Italian defense; their opposite, Krystle Esdelle, scored four aces in a row changing the plot of that set and paving the way for the final 21-25.

VILLA CORTESE changed setter for set 2 and surprised the German team by opting for many fast attacks. Hence the Italians re-gained control of the operations and sailed rapidly to the final 3:1, thereby taking home three points from this game.

Federica Stufi, one of the four rookies included in the roster of MC-Carnaghi, was named MVP after the middle blocker finished the game by registering 8 blocks.

“We are very happy but actually it is a win we had reckoned with” she says. “They took many risks in serving and put us under pressure; however, we changed our mental approach and then everything went well”.

“We have a very young team so we pay the price for our limited experience” adds Dutch head coach Teun Buijs, the mentor of SCHWERINER SC. “We are nevertheless quite satisfied even though we have to improve for the future”.