Dresden, Germany, December 7, 2011. DRESDNER SC can’t wait for the home debut in the 2012 CEV Volleyball Champions League against one of the strongest teams out there, Azerbaijan’s Rabita BAKU, i.e. the winner of the Club World Championship held in Doha, Qatar, this past October. 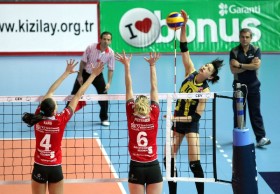 These teams already crossed their ways back in the 2008/2009 season and namely in the Challenge Cup;

DRESDNER SC claimed the home match 3:1 but failed to make it to the next round after losing the return match in Azerbaijan in straight sets. This time the scenario looks totally different as DRESDNER SC is a real rookie while Rabita has gradually turned into a real heavyweight of the international Volleyball arena.

“While our club is very much involved in youth programs and the development of rising talents, Rabita has signed almost only world-class and professional players. Their yearly budget is comprised between 5 and 10 million € while we only have budgeted 1 for this season” says German head coach Alexander Waibl.

After being the runners-up of the last Champions League, Rabita claimed the Club World Champs in Doha and is one of the main contenders for the crown also in Europe’s finest competition whose final four will take place in Baku next March.

Rabita has brought together players from seven different countries, including Natasa Krsmanovic and Silvija Popovic, members of the Serbia national team that claimed gold at the European Championship this past October.

“I am really excited to play Rabita and we will fight for every single rally to gain valuable experience for the future” concludes German mentor Alexander Waibl.