Cyprus overcame stuffy opposition in the shape of a pumped-up San Marino team to retain their 100% record at the 2012 CEV Junior Volleyball European Championship – Small Countries Division final in Scotland and move ever-closer to the gold medal. 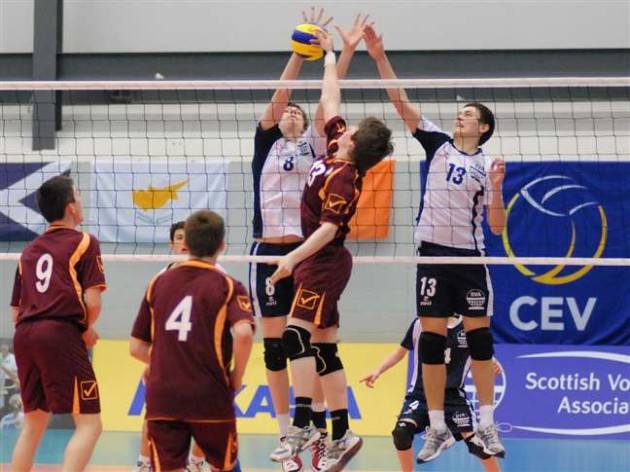 San Marino opened brightly, and a spell of strong serving from middle blocker Daniele Terenzi together with wastefulness on the part of Cyprus handed the first set to San Marino 25-20, with San Marino captain Lorenzo Benvenuti in particularly fine form.

Cyprus exchanged wing spiker Konstantinos Yiannakos who had been excellent in their first three matches, but appeared to be off the boil here, for the explosive Konstantinos Ttofias, and this, coupled with added aggression in the blocking phase, turned the tide back to the Cypriots, who were seldom thereafter troubled and emerged victors 3:1 (25-16; 25-14; 25-19).

Luxembourg were handed a shock in the first set by Northern Ireland, with the Ulstermen claiming it 25-23 as Irish wing spiker Peter Stewart proved the main man in the early exchanges.

Luxembourg reintroduced middle blocker Ben Hoffman to the fray in the second set and his extra strength in the block helped negate the Irish attack.

With the match in the balance, wing spiker Maurice Van Landeghem took the first service of the third set, and split the tie wide open with 11 unanswered service points, permitting Luxembourg to see off the match.

Scotland had the easiest task of the day, dealing with Ireland in straight sets with the ease to run their bench in the third set.

Scotland coach Thomas Dowens confirmed his satisfaction at the overall performance afterwards and emphasized that his team was still on target to reach their pre-tournament goals.

The final match of the tournament brings together Luxembourg and Scotland in a straight battle for the silver medal, with Cyprus needing to have a catastrophic failure against Northern Ireland to drop out of the gold medal position.