The Cypriot girls struggled a bit against Scotland in their opening match of the finals of the 2012 CEV Junior Volleyball European Championship – Small Countries Division on Friday evening but eventually scored a 3:1 (25-9, 25-17, 22-25, 25-17) victory that keeps the home team on track in its quest for its first ever gold medal in the history of the competition. 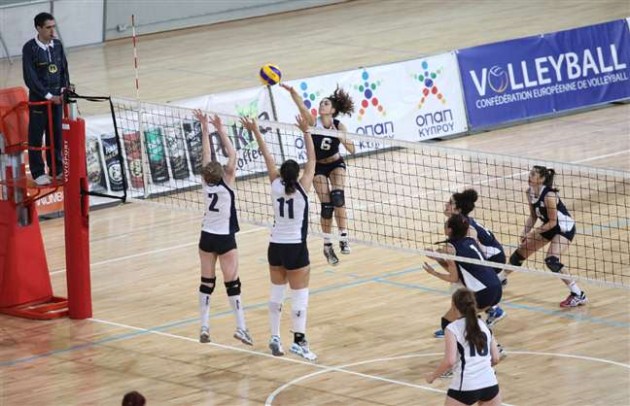 Cyprus got off to a brilliant start, but with head coach Manolis Roumeliotis giving court time to all his players, this allowed Scotland to take the initiative in the third set and stay alive for a fourth.

With starting setter and captain Ioanna Leonidou sidelined in the fourth with a slight injury, Cyprus nonetheless finished the match without further problems as substitute setter Nikolina Spyrou was able to dictate a good tempo.

“I think we deserved to win” said Cyprus’ head coach after the match. “We lost a set that we shouldn’t have, but at least all our players got the chance to play”.

“We were worried about Cyprus before the game and this affected our performance in the first set” said Scotland’s head coach, Vincent Krawczyk. “Cyprus made some substitutions in the third set and it’s a credit to our team that we took advantage of this, but in the end Cyprus was too strong”.

With Eleana Petrou from the home team scoring 13 points and Eftychia Irakli and Antonia Theoti adding 12 more apiece, Cyprus was out-served (seven aces to nine for Scotland) but had better efficiency in attacking.

In the opening match of the final round, earlier on Friday, Luxembourg had defeated Liechtenstein in straight sets. Action in Limassol continues on Saturday with Luxembourg taking on Scotland and Cyprus playing against Liechtenstein.