On Sunday afternoon the young ladies from Scotland scored yet another brilliant victory downing Liechtenstein 3:1 (25-22, 23-25, 25-20, and 25-17) to secure a medal at the 2012 CEV Junior Volleyball European Championship – Small Countries Division. This result left Liechtenstein winless and hence in the last place of the standings. 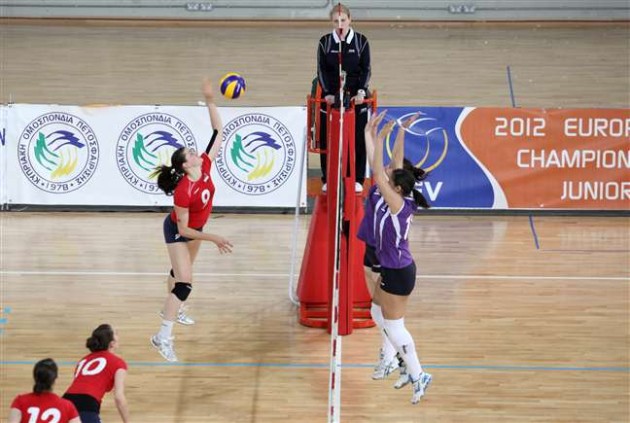 Scotland got a quick lead in the first set, reaching set point with eight balls to spare at 24:16. Liechtenstein’s attempted comeback brought a six-point rally with Colleen Malcolm serving, but her last attempt was too long, giving the deciding point to Scotland.

Despite dropping the second set, Scotland was totally in control throughout the match for a well-earned victory.

“We made a very good start to the game” said the head coach of Scotland, Vincent Krawczyk. “I made some changes to the team in the second set and we lost some momentum but we managed to get our composure back when I moved out setter Nicola McKenzie to the outside and she emerged as our best player”.

Naomi Symonds was top scorer of the match with 19 points as Scotland out-blocked their opponents with 18 stuffs to 7 and out-served them with 15 aces to 5.

The finals conclude later Sunday, with Cyprus challenging Luxembourg for the title at 19:00 local time (16:00 GMT). The result of this match will also determine whether Scotland earns silver or bronze.