Alessandro Fei received the prestigious Gazzetta award at the beginning of the game as the MVP of the regular season. Then, it proved to be a tight affair between Belluno and Latina. In the end the guests provided the upset of this first day of playoff action. 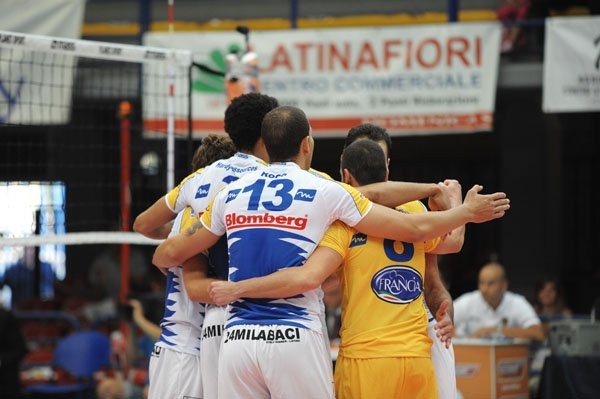 Silvano Prandi (coach Andreoli Latina): “We have won because we did a better job of handling the mistakes. It’s not been a spectacular game from any team, but in those games the winner is the one that make the least mistakes. In the second part of the game, we made some good plays and played a little more loose than Belluno, which did not play its best volleyball. Now we have a day rest before meeting Modena on Monday, another top level team like Belluno. This win gives us a lot of motivation, we’re extremely excited but we expect another battle in which we’ll need another good performance”.

Roberto Piazza (coach Sisley Belluno): “We had two set points in the first set, we could have sealed it at 24-22 but we failed to do so. The great teams have the killer instinct to resolve those situations, we still have a lot to learn. Our game was not brilliant but we were still in it thanks to our blocking, but that was not enough because we made too many mistakes and allowed them to take confidence. I knew Latina was an excellent team, and they proved it during the whole season, I’m sorry I was right. Tomorrow, we’ll play the most important game of the season, we have to bounce back immediately because  Modena is a great team. We’ll have to play better than today and try to win, although this would not guarantee us the qualification. We’ll have to play all out and try our best until the end, unfortunately whatever happens, our destiny will be in the hands of others”.

Daniele Bagnoli (coach Casa Modena): “Belluno did not play at its usual standard today, this was a surprise but that goes to show how unpredictable the playoffs can be. They won’t give anything away tomorrow, Belluno never gives up, this will be a different game, they’ll be eager to redeem themselves. In those situation, every game has its  own story, we’ll have to be focused and stop them from developing their game in what I expect to be an extremely hard-fought encounter. It’s true that today’s result goes in our favor but we’ll have to make sure we take advantage”.

*one game in hand