CEV junior W: Poland and Germany remain the dominant forces in Mogilev after third round of play

Mogilev, Belarus, April 13, 2012. After three days of action Poland and Germany are topping the charts of the European qualifier that is currently running at “Olimpiets” sports hall in Mogilev 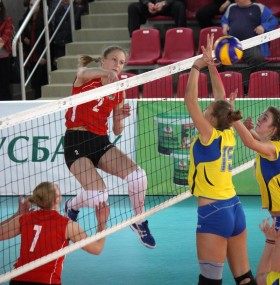 On Friday Poland downed Lithuania in straight sets (25-13, 25-14, 25-20) with head coach Andrzej Pec using this match as an opportunity to test all of his players.

Today’s second match starring the home heroines of Belarus and Latvia promised to be interesting as the girls around Beach Volleyball star Inguna Minusa were still longing for their first win there in Mogilev. As for the home side, having set the goal to finish among the top three to keep a chance to make it to the final round of the European Championship, Belarus needed to score a positive result and eventually did not disappoint their fans by seizing the day with the score of 3:1 (22-25, 25-20, 25-18, and 25-22). Actually Belarus had a weak start losing the first set to Latvia that was anchored by Alise Lece and Annija Abolina as well as helped by the many errors of the hosts. Head coach Mikhail Kovalenko opted for some changes and he turned the odds around with team captain Volha Lazitskaya scoring 24 points all alone for the local favorites.

Germany completed Friday’s program by routing France 3:1 (25-13, 22-25, 25-16, and 25-21) with Carina Aulenbrock standing out with a terrific performance in all fundamentals. France fought bravely but Germany well deserved that win. “We knew that the match with France would have been tough; after spending three weeks together while preparing for this European campaign we knew their potential and quality” said Germany’s head coach Han Abbing. “This is a very tough group and I am evidently upset after this game” added France’s mentor Jacques Beraud. “Tonight we played well in attack and defense but unfortunately we missed one fundamental as our block was almost not existent. However, I am still proud of my players” he concluded.