Nova Gorica, Slovenia, April 13, 2012. After the third day of action in Nova Gorica, the standings of the European qualifier remain extremely close as no team has been able to keep a perfect record and hence the quest for the sole ticket at stake to make it to the final round scheduled for mid August in Ankara is more than open. 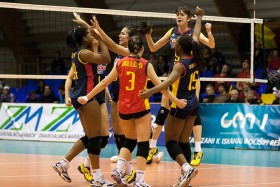 On Friday the girls of Sweden claimed their first win in the tournament by beating Croatia with the score of 3:1 (25-18, 12-25, 31-29, and 25-19). Croatia’s head coach Nino Matjacic said this was the worst game played so far by his girls while Sweden showed great determination and the desire to bring it home with a positive result. “We are happy with this win after suffering two defeats” stresses Sweden’s mentor Karl Nordén. “We were a little down after the first two days and we tried to motivate the girls; today they were more relaxed and were hence able to display their potential”.

The hosts of Slovenia celebrated their second win in Nova Gorica by edging Ukraine 3:1 (25-13, 23-25, 25-16, and 25-11). This is a very important result as the home side has the ambition to qualify directly – without passing through the third-round qualifiers scheduled for early July – for the European Championship in Ankara. “This was an important victory after the defeat we suffered yesterday against Croatia” said local mentor Bruno Najdic. “We had to pressure the Ukrainians with our service to make sure they were not going to score with their fast side-out. We were able to fulfill our goal even though we lost the second set, but still we took three points from this match which is what really matters in the end. We can see that things are changing day by day here and so we have to stay concentrated also for the next matches because everything is possible, even to finish first in the group”.

Later in the evening Spain stopped the winning streak of Belgium by scoring a speedy 3:0 win (25-23, 25-21, and 25-20). Spain has a 2:1 win/loss record so far in the tournament, the same like the hosts of Slovenia and Belgium. “I think this was our best game so far here” said head coach Jose Miguel Serrato. “We played against a very solid team displaying a good reception and attack, also from the back row”.

CEV junior W: Poland and Germany remain the dominant forces in Mogilev after third round of play