Ankara, Turkey, April 13, 2012. Turkey and Germany are very much likely to fight for the sole ticket at stake to make it to the final round of the 2012 CEV Junior Volleyball European Championship scheduled for late August as these sides are still unbeaten in Ankara after three days of actions there at “Baskent” sports hall. On Friday Turkey downed Slovakia in straight sets while Germany did the same with Latvia, with the surprising guys from Austria claiming their second win in the group outclassing their opponents from Portugal with another 3:0. 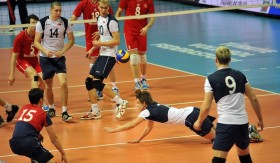 Austria opened the program on Friday at “Baskent” sports hall by downing Portugal in straight sets to claim its second win in the tournament (25-19, 25-18, and 25-14). Even though Portugal started off with a good pace (8:5), Austria gradually found its best play to pocket the opening set with a pretty comfortable 25-19. The Austrians enjoyed the narrowest margin at the first technical time-out of set 2 but gradually widened the gap (16:12) to wrap it up with a pretty easy 25-17. Outside hitter Anton Menner and opposite Lorenz Koraimann set the pace for Austria in set 3 with their spikes and blocks (8:5, 16:7), thereby paving the way for the final 25-14. Koraimann finished the game as top scorer with 18 points – including 3 blocks – well supported by Menner who added 16 to the Austrian count.

Germany scored its third consecutive win of this European campaign by edging Latvia in three straight sets (25-13, 25-22, and 25-20). Germany asserted its supremacy right by the start of the game with good serving contributed by middle blocker Friederich Nagel opening the gap after the second mandatory break (16:11, 25-13). The score stayed very close in set 2 up to a deuce at 21 where Germany changed gear and closed it at 25-22. Germany’s rule was never to be questioned also in set 3 (8:3, 16:9) so that the game ended in a 3:0 (25-20). Florian Hecht top scored for Germany with 11 points including 4 blocks well helped also by middle blocker Yannick Harms with 10.

The home guys of Turkey rounded out the day with another win in straight sets, this time while playing Slovakia (25-21, 25-20, and 25-15). Well supported by a good serving turn of middle blocker Koray Sahin Turkey immediately set the tone of the game (8:5) and was able to maintain that difference all the way through to go for the provisional 1:0 (25-21). The same plot unfolded in set 2 with Turkey enjoying the leadership by both mandatory stops (8:7, 16:13) to finish it off at 25-20. Slovakia looked unable to fight back right from the start of set 3 and with some terrific blocks killed by Ugur Günes Turkey quickly wrapped it up in straight sets (25-15). Outside hitter Burak Güngör top scored for the home side with 16 points while 7 more were contributed by Gokhan Gökgöz.