Ankara, Turkey, April 14, 2012. Turkey and Germany will be battling on Sunday for the sole ticket available in Ankara to advance directly to the final round of the 2012 CEV Junior Volleyball European Championship scheduled for late August in Poland and Denmark. 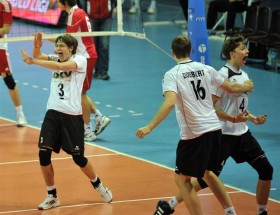 The hosts conceded one set to their opponents from Portugal on Saturday while Germany was almost edged by the real sensation of this tournament, i.e. Austria, and had to storm back from two sets down to eventually score a fourth win in Turkey’s capital city at the tie-break. Sunday’s “final” starring Turkey and Germany will be the absolute highlight of the week with the hosts hoping to enjoy the support of a massive audience to successfully round out their home campaign.

Even though Germany opened strongly going up at both mandatory stops of the first set (8:6 and 16:13) Austria gradually found its best play to go for the final 23-25 after displaying some high-class Volleyball. Austria extended that good momentum also to the second set setting the pace all the way through (6:8, 11:16) to finish it at 18-25 well supported by the superb blocks killed by Ulve Steidl. Germany was trailing down also in set 3 (6:8 and 11:16) and it looked like the Austrians were going to claim an incredible win in straight sets.

However, Germany woke up in due time and anchored by outside hitter Phillip Trenkler could change the course of the game (25-23). Austria dictated the pace of the match also in set 4 (6:8 and 15:16) but finally Germany drew level at 19 and pocketed that section of the game with the score of 25-22. A similar plot unfolded also in the deciding tie-break with Austria having a margin of 4 as teams changed sides of the court before Germany completed another comeback to finish it off at 16-14. Germany’s opposite Tim Dobbert topped the charts of the best scorers with 28 points including 3 blocks while this time Austria’s best scorer, Lorenz Koraimann, played a little below his standards and could collect “only” 17.

On Saturday Slovakia claimed its first win in Ankara by edging Latvia 3:1 (24-26, 25-17, 25-17, and 25-22). Latvia caught a good start setting the pace all the way through in the opening set (8:4, 16:14) and even though Slovakia almost succeeded in completing a late comeback, the guys from Riga could seal this affair by the score of 26-24 well helped by their outside hitter Edvarts Buivids. Things changed in the second set where Slovakia dominated the scene after the first technical time-out going for a speedy 25-17 repeating the same run also in set 3. Latvia could not fight back and Slovakia finished it off with a 3:1 to celebrate its first positive result of the tournament. Slovak middle blocker Adam Prielozny top scored for his side with 17 points including 6 blocks, while his teammate Pavel Galandak totaled 16.

Turkey extended its winning streak to four consecutive matches by edging Portugal in the last match of the day with the score of 3:1 (23-25, 25-14, 25-16, and 25-20). Portugal surprised the hosts in the opening set before Turkey got back full control of the operations in set 2. The local heroes asserted their supremacy in the third set by going up 8:5 and 16:9 to go for a speedy 25-16 and they eventually repeated that same show also in set 4 to wrap it up with a 25-20. Turkey’s captain Burak Güngör paced his side by scoring 21 points well supported by Koray Sahin who totaled 17, including 7 blocks.