Piatra Neamt, Romania, April 14, 2012. Russia and Romania are set to play a kind of “final” on Sunday at “Sala Polivalenta” in Piatra Neamt after these sides scored a series of 4 wins so far in the group to top the charts there and have a shot at the sole ticket available to make it to the final round of the Junior European Championship scheduled for mid August in Turkey. 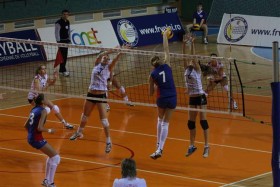 Russia literally demolished Hungary leaving only 21 points in three sets to their opponents while Romania had to fight hard on Saturday to overcome the resistance posed by a young but very talented Greek side.

Russia’s dominance looks overwhelming in this group with the girls mentored by head coach Svetlana Safronova downing Hungary on Saturday afternoon with a terrific score line (25-5, 25-8, and 25-8). It was a real show of strength by the Russian side that displayed great Volleyball in all fundamentals. Russia opened with a massive 8:1 thereby already setting the tone of what was to follow, with middle blocker Irina Fetisova standing out with her great spikes and blocks. Hungary tried it hard to stay tuned but in vain.

By the second mandatory stop Russia was leading with the terrific score of 16:2 with setter Elena Novik regularly finding the right coordination and timing with her attackers, especially with Anna Luneva and Kseniya Ilchenko, so in the end Hungary could collect only 5 points from the opening set.

Russia dominated the scene also in set 2 with superb attacks and a block that looked like a wall for the young girls from Hungary, who were somehow helped by their opposite Orsolya Ilyes but she also could not do much to stop the Russian express that went up 8:3 and 16:6 by the first and second technical time-outs. Russia on the other side played with great confidence and anchored by the spikes of Luneva and Fetisova plus a solid reception quickly finished it off at 25-8.

Hungary opened a little better in set 3 but even the spikes of Ilyes were easily controlled by the Russian block and defense line, so the score moved quickly up to 8:5 and 16:7 with Russia going for another 25-8 to seal its fourth consecutive win – always in straight sets – since the start of the competition in Piatra Neamt.

Romania will challenge Russia on Sunday for a ticket to make it to the final round of the European Championship after the home heroines claimed this afternoon a very tough match against Greece which ended with the score of 3:1 (25-22, 22-25, 28-26, and 25-12).

The score was initially very close with middle blocker Iuliana Matache contributing the provisional 8:7 for Romania at the first technical time-out. Greece reacted with the spikes of Dafni Veroudaki who pretty often found her way through the Romanian defense and even though the home side was up 16:13, Greece responded bravely turning the tables around (19:21) with their spiker Olga Strantzali.

However, Romania had a last reaction there down the final stretch with Cristina Cazacu and Diana-Dora Carbuneanu contributing the final 25-22. The home side dictated the pace of the game for most of the time in set 2 (8:3, 16:14) but suddenly their reception faded down and Greece immediately enjoyed this opportunity to move to the front especially via the attacks of middle blocker Emmanouilidou. The local favorites attempted a late comeback but did not succeed in their intention as Greece sealed it at 22-25.

The guests imposed their play also in the third set going up 8:3 and 16:7 as Romania struggled to find a way to stop their middle blockers before Matache and Cazacu got back their best play to claw back and bring their side to a difference of only one point (20:21). Greece responded with some blocks but Romania did not let it go and finalized its quest by the score of 28-26. With the positive energy stemming from such a comeback, the home girls did no more lose control of the game and totally dominated the scene in the fourth set by leaving only 12 points to their rivals.

Finland completed today’s program by edging Portugal in straight sets (25-9, 25-12, and 25-16). The Finns totally dominated the scene there right from the start with wing spiker Sanni Rihu that set the pace in the opening set;

Portugal tried to respond with middle blocker Beatriz Santos but after going up 16:8, Finland quickly wrapped it up at 25-9. Rihu paced Finland also in set 2 (8:2, 16:8) and even though Portugal fought bravely for every single rally, still it could not avoid another easy 25-12 for the “Suomis”. Portugal could not find any way to stop the Finnish march and the game ended in a 3:0 after the Finns – once again mainly via Rihu – crashed Portugal’s defense (25-16).