Kharkiv, Ukraine, April 14, 2012. The young guys from Belgium are topping the standings of the European qualifier that is currently taking place at “Lokomotiv” Sports Palace in Kharkiv after on Friday the group mentored by head coach Emile Rousseaux edged the local heroes of Ukraine 3:2 at the end of a terrific fight (22-25, 25-16, 25-13, 21-25, and 16-14). 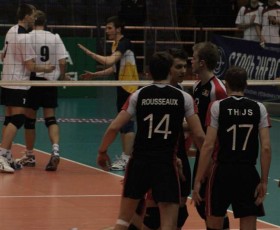 The match was very close right from the start but the Ukrainians were able to clip a small margin after the second technical time-out and bring it home with the score of 25-22. However, set 2 and 3 were totally dominated by the guests from Belgium who asserted their supremacy with a massive score line (25-16 and 25-13) with Ukraine’s head coach Anatoliy Yanushchyk trying quite many substitutions but still unable to change the course of the game.

The home heroes found back their best play and total determination in the fourth set where they could display a solid performance to call for the tie-break (25-21) which turned into a real drama. Ukraine went up there 5:2 before their opponents scored the next four rallies to turn the tables around (6:5). Both teams fought for every single ball and finally Belgium came out on top (16-14) thereby keeping the first place in the charts of the group.

Friday’s program was opened by the Netherlands that edged Croatia 3:1 to move up to third place in the standings. The “Oranjes” claimed the opening set pretty easily (25-16) but they relaxed a little too early thereby paving the way for the provisional 1:1 as Croatia stormed back in set 2 (25-21). After this kind of “black-out”, the Dutch guys got back together and did not want to take any additional risk, imposing their pace in set 3 (25-19) and doing the same also in the fourth set as they scored the deciding points of a close final rush there (25-23).

Israel scored its first win of the tournament on Friday by edging Hungary in straight sets (25-15, 25-23, and 25-15). Israel generally dominated the scene there with the only exception being the second set that was pretty close. With this victory Israel moved up to the fourth place of the charts in Kharkiv re-opening the door for making it at least to the third-round qualifiers scheduled for early July whose pass will be booked by the teams ending their campaign in second and third place.