Kharkiv, Ukraine, April 15, 2012. The guys of Belgium’s national team completed their campaign at the European qualifier held at “Lokomotiv” Sports Palace in Kharkiv with a perfect record as they edged Israel in the last day of action with the score of 3:1 (25-22, 18-25, 25-23, and 25-12) to re-assert their supremacy in the group. 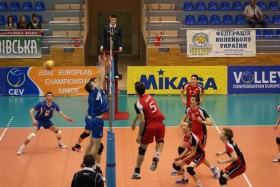 The group mentored by head coach Emile Rousseaux had already pocketed a ticket for the final round of the 2012 CEV Junior Volleyball European Championship on Saturday and today they were able to stay focused once more to defeat a strong and ambitious Israeli side.

Belgium started really well pocketing the opening set (25-22) but relaxed a little too early so that the guys from Israel could go for the provisional 1:1 (18-25).

Belgium set the pace of the game for most of the time in the third set but Israel stormed back to draw level at 23 all before the guys from Brussels could score the next two to seal this section at 25-23.

Afterwards Belgium dominated the scene in set 4 going for a massive 25-12 to complete an already memorable campaign in Kharkiv.

The Netherlands finished second in the group – and thereby advanced to the next stage of the qualification process – after scoring a speedy 3:0 win on Sunday over Hungary. Only the second set of this game was balanced and there both sides had to fight for every single point, but finally the young “Oranjes” could pocket their pass for the third-round qualifiers slated for mid July by finishing it off in three sets (25-21, 25-23, and 25-19).

RUS W: Angelina Grün as the best volleyball player in the Russian Superleague