Friedrichshafen, Germany, December 12, 2011. The participation in the 2012 CEV Volleyball Champions League is not only about sets won and lost for VfB FRIEDRICHSHAFEN. 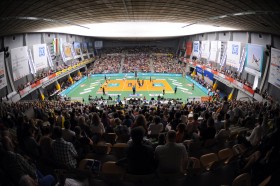 The German club has indeed announced that for every single ticket sold for the home match coming up this Wednesday against Remat ZALAU 1 € will be donated to a charity named “Kinderstiftung Bodensee” that helps poor children living in the area around the Lake of Constance.

This institution is very much involved in supporting children that live right next to or even below the poverty line. It does not only help them financially, but also via educational, musical and physical programs. The charity was founded this past October 7 by the Caritas Bodensee-Oberschwaben-Linzgau after an analysis delivered by the “Zeppelin University” based in Friedrichshafen revealed that one out of six children from this area live near or even below the poverty line, especially as many are being taken care by single mothers. So these children do not simply suffer of poverty but also of poor human relationships.

“Our region is one of the strongest economic powers in Germany but it clearly suffers social shortfalls” says Benedikt Otte, a Board member at “Kinderstiftung Bodensee”.

“It is with great pleasure that we have accepted the proposal of VfB to support us in helping these children”.

“The happy and bright eyes of a child are for me the most beautiful thing on earth” says the CEO of VfB FRIEDRICHSHAFEN, Jürgen Hauke.

“An investment in our children is always an investment in our future” he adds. “We appreciate the work performed by this charity because they do not simply help these kids financially but also by giving them the chance to practice some sports for their physical development” he concludes.