Zalau, Romania, December 12, 2011. The Romanian team Remat ZALAU is preparing for its two 2012 CEV Volleyball Champions League matches against VfB FRIEDRICHSHAFEN, starting with the away match scheduled for this coming Wednesday followed by the home confrontation that will take place next December 21. 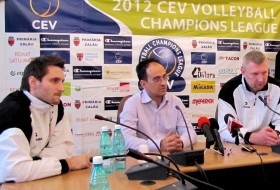 During today’s press conference, Mariusz Sordyl, the Polish head coach of Remat, stated that “our team will do its best to gain points and why not, win the game. We will try to raise ourselves to the level of our opponent. We respect VfB FRIEDRICHSHAFEN because they are a great team with a lot of experience in the European Cups”.

Zoltan Mozer, the captain of Remat ZALAU, added: “This match will probably be a difficult one. Winning is of a vital importance for us, for the leadership of the team and for our amazing supporters. To achieve this, it is compulsory for us to perform well in reception and serve strong“.

Cristian Ciobănescu, team manager, confirmed that Andrei Laza recovered from his health problem and he is ready to fight in Germany.

Also, Radu Căpîlnaşiu, Co-President of Remat and Mayor of Zalău, was quite optimistic regarding the chances of his team, saying that “unlike the previous season, when we fought in a much more difficult Pool, now we are more experienced. We will try to do our best in order to win”.