Kazan, Russia, December 13, 2011. Zenit KAZAN has so far a perfect record this season with 9 wins in as many matches by combining the national league and the prelims of the 2012 CEV Volleyball Champions League. 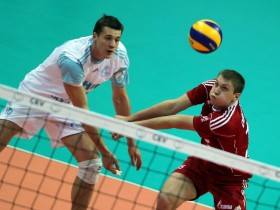 Zenit KAZAN is determined to stretch its winning streak

The home fans hope that this winning streak will be stretched this week as the Tatars play Euphony ASSE-LENNIK of Belgium for the third leg of Europe’s most elitist competition.

Head coach Vladimir Alekno and five players – Nikolay Apalikov, Alexander Volkov, Maxim Mikhaylov, Evgeny Sivozhelez and libero Alexey Obmochaev – got back last week from Japan after they topped the final standings of the FIVB World Cup thereby qualifying for the 2012 Olympics in London.

Another player of Zenit, US American Reid Priddy, did also participate in the World Cup with the US eventually finishing in sixth place.

Zenit KAZAN recently edged Lokomotiv–Izumrud EKATERINBURG in the national league (3:0; 25-23, 25-14, 34-32) by testing some options and having Yury Berezhko back in action after he had to nurse an injury.

Berezhko paced Zenit with 14 points and the team is currently leading the standings of the Eastern Conference with 6 wins in as many matches.

“We have to change our priority from the national team to the club” says head coach Vladimir Alekno.

“Our players are in a different state; some have enough of Volleyball after the busy weeks with the World Cup while some others have only trained and not played at all for one month. I hope this will not affect our performance with Euphony. There are no weak rivals in the Champions League, so we have to be ready for a real fight” he stresses.

The Belgian team – that was beaten this past weekend by Noliko MAASEIK in the national league – is mentored by former Dutch international star and Olympic medalist Marko Klok who is pretty known to the Russian fans as he played for Fakel NOVY URENGOY back in the 2006/2007 season.

ITALY Serie A1: Trento wins in Rome and stays top