CEV M: Bulgaria claims top spot in Pool I and helps Serbia into the semis

Bulgaria managed to hammer out a third victory at the 2012 Olympic Games - European Qualification for men in Bulgaria, and claimed the first place in Pool II with a perfect record. Cheered on by the colorful crowd on the stands of Arena Armeec hall, the Lions defeated Spain by 3:0 (25-16, 25-20, 25-16) and allowed Balkan neighbor Serbia to stay in the runner-up position of the pool and become the fourth team to secure its participation in tomorrow’s semifinals. CEV President André Meyer was also among the spectators of the game. 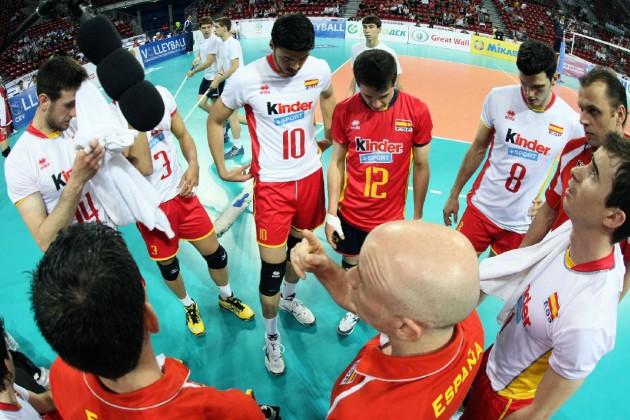 In the first set the Spanish team was able to stay in contention only before the first technical time-out.  The Bulgarian block proved almost impossible to break through, while the offense, led by captain Vladimir Nikolov, took care of opening up a wide gap of 9 points to close the set at 25-16.

Although winning the first set secured the first place in the pool for the Bulgarian team, head coach Radostin Stoytchev showed no mercy for the Spaniards and started the second set with the same lineup as the first.  Spain fought to stay alive with improved spiking efforts, especially from Iban Perez, but the opponent was just way too strong.  Vladimir Nikolov kept his 100% success rate in attack while the block continued to contribute greatly towards the eventual 25-20 in the set.

Finally for the third set Stoytchev gave some rest to Vladimir Nikolov, Todor Aleksiev and Nikolay Nikolov and a little later he also pulled Matey Kaziyski out of the court.  But the Spanish spirit was already completely gone.  The team of coach Fernando Muňoz Benitez made too many unforced errors, while the Bulgarian attack, now led by second opposite Tsvetan Sokolov, continued to score point after point.  Another impressive 25-16 was registered at the end of the set to the great satisfaction of the thousands of Bulgarian spectators in the hall.