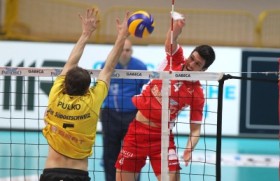 In the next round of the competition the Italians will play Germany’s BERLIN Recycling Volleys.

“Today everything went easy and we are evidently satisfied with the result. We are going to prepare for the next round where we play BERLIN Recycling Volleys, a much tougher opponent than the Swiss guys. Our goal is to deliver our best in the national league as well as in the CEV Cup” says the setter of Acqua Paradiso MONZA, Luciano De Cecco.

Marek Tomas of Seat Volley NÄFELS: “The participation in the 2012 CEV Volleyball Cup has been a valuable experience for us, especially for the young players who had the opportunity to test their likes against strong teams like MONZA. We travel back to Switzerland and we will entirely focus on our national league” says the 38-year old Czech player.