Cuneo, Italy, December 21, 2011. One week after scoring an away win in France, Bre Banca Lannutti CUNEO outclassed again Stade Poitevin POITIERS in straight sets (25-18, 28-26, 25-18) after 72 minutes of play to back up its leadership in Pool D of the 2012 CEV Volleyball Champions League – Men. 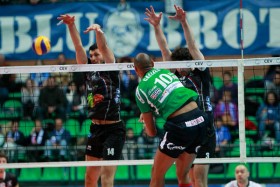 CUNEO started impressively setting the pace all the way through in the opening set (8:4, 16:12 and 20:16), going straight up to the end without losing composure.

The second set was much tighter with a neck-to-neck race that paved the way for an exciting final rush.

There POITIERS missed out on a couple of set balls before Nikola Grbic sealed the final 28-26 for the home side.

Bre Banca Lannutti opened the gap at 14:11 in the third set and eventually sped up to score a speedy 25-18 for a 3:0 win that was sealed by a pipe of captain Wijsmans.

“We slightly lost our focus in the second set and we did too many errors but then we got back on track. It was very important to take this match tonight and we are happy with the result” says the Belgian-born spiker.

“This was not a good day for POITIERS. We did not play our best but we also know that CUNEO is a great team and after playing them last week we knew what was going to come. The second place in the group is now a close affair with UNTERHACHING and CESKE BUDEJOVICE” states the captain of Stade Poitevin, Nuno Pinheiro.