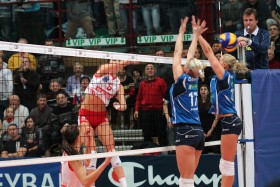 Similarly to the game played last week in Italy, MUSZYNA started strong going up 16:10 in the opening set before the Italians clawed back furiously and dominated the last section anchored by their star Serena Ortolani.

The opening of the second set was also very balanced, with the home side setting the pace by the first technical time-out (8:7) before PESARO turned it around again with Ortolani and by profiting of some silly errors committed by the local heroines.

The third set was going to determine the final outcome of the game and both teams displayed some great actions; Scavolini had a first match point at 23:24, before MUSZYNA scored two in a row but Joanna Kaczor missed her next attack from the wing and did not finalize the provisional 1:2.

On the other side of the net, the Italians stayed concentrated and eventually wrapped it up in straight sets.

“I think our block was the key to win today. Usually MUSZYNA scores some 16 per match and today they totaled only 7. This makes a huge difference. I think three teams, Dinamo, MUSZYNA and Scavolini have been playing at the same level, so it still remains open to determine who will finish on top of the group” says Italian coach Luciano Pedullà.

“I tried to change something in our reception because it was a real disaster tonight but I could not find a good way to fix this problem, so PESARO deservedly won this game” adds local mentor Bogdan Serwinski.