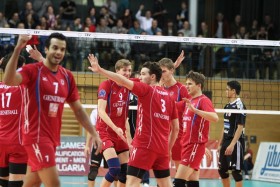 With five points after four legs in preliminary Pool D UNTERHACHING can reach the Playoffs 12 via the remaining matches against Stade Poitevin POITIERS (scheduled for next January 12, 2012) and versus Bre Banca Lannutti CUNEO (January 18).

“We knew that it was going to be more difficult than last week”, UNTERHACHING’s coach Mihai Paduretu said after the thriller in front of 1’200 spectators that lasted for 1 hour and 52 minutes.

“Too bad”, Paduretu added, “that we didn’t gather three points, but our chances are still alive”.

Jihostroj CESKE BUDEJOVICE’s chances of advancing to the Playoffs 12 are somewhat slimmer now.

“After the third set UNTERHACHING started to play better and we didn’t receive very well. I’m unhappy, because we could have left here with at least two points” the visitors’ coach Jan Svoboda said.

Christian Dünnes totaled 21 points for UNTERHACHING, while Jakub Novotny was the Czech best scorer with 19.

The libero was still feelings the effects of lumbago.

So the white shirt was again worn by Slovakian Robert Hupka who did so already convincingly at FRIEDRICHSHAFEN and at the end of October in a Champions League match at Stade Poitevin POITIERS which was the last time the Bavarians had lost a game this season.

Eight days after the first encounter between the two teams in the Czech Republic had ended with UNTERHACHING’s first win in preliminary Pool D (3:1) the hosts experienced a fairly unusual slow start at Generali Sports Arena.

At the first technical time-out they were down by three points (5:8) only to cut the deficit down rapidly after that.

From 12:12 on it was a tight affair with no team going up by more than one point until a huge block by Max Günthör made it 21:19 for Generali.

The captain brought UNTERHACHING its first set-point shortly after at 24:21 and finished the set with a serve that CESKE BUDEJOVICE couldn’t return.

In the second set the three-time and defending German Cup winner, who is the only German team still unbeaten in national competitions this season, got off to a better start, leading 8:6 at the first technical time-out only to fall back by as many as six points at 17:23.

Now it was Jihostroj making the big points while UNTERHACHING made easy mistakes and found no way to consistently block the visitors’ attacks.

CESKE BUDEJOVICE, which had brought in wing-spiker Petr Michalek for Tomas Fila, easily won the set 25-20 after 24 minutes.

Generali’s problems continued in the third set. Time and again Jihostroj found a way to expose the host’s block, especially when Stepan Smrcka came through with his attacks through the middle.

UNTERHACHING led 9:8 though, but found itself in a hole again, being back by as many three points (11:14).

This time, however, the hosts were able to muster a comeback and even a comfortable lead (22:19) – only to break down suddenly and surprisingly.

CESKE BUDEJOVICE evened things up at 23:23, and with two powerful attacks Jakub Novotny finished the set for the enthused Czech champion.

Facing early elimination from Champions League competition UNTERHACHING did what it had done all season – at least in national competitions: show some of its best Volleyball under pressure.

The hosts took an early lead and were up by as many as five points at 12:7, 17:12 and 24:19 – only to give their opponents the chance to cut the deficit back to two points each time.

At 24:22, however, Denis Kaliberda relieved the raucous crowd and finished off the fourth set with a powerful smash.

Obviously enthused by winning the fourth set, UNTERHACHING kept the pedal down to the metal.

The tie-break proved to be close only until 3:3, then Generali simply overpowered the Czechs and made six points in a row. Denis Kaliberda finished off the match. “In the fifth set you really saw that we wanted to win this one”, captain Günthör said.