Muszyna, Poland, January 9, 2012. After losing to Scavolini PESARO in the last round of action before the Christmas break, Bank BPS Fakro MUSZYNA needs a win this week to stay in contention for the leadership of Pool E in the prelims of the 2012 CEV Volleyball Champions League. 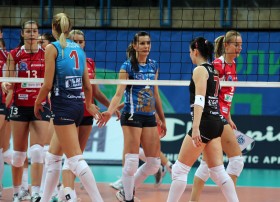 Scavolini currently tops the charts with 9 points, Bank BPS Fakro is second with 8 followed by Dinamo MOSCOW with 7.

Crvena Zvezda BEOGRAD has suffered 4 losses in as many matches so far so the match scheduled for Wednesday with the team from Russia’s capital city is a good opportunity for MUSZYNA to take home 3 points.

The Polish champions won the previous match in Moscow after a long battle.

“Dinamo is one of the best teams in the world so our win in Moscow was just fantastic” says Bank BPS Fakro head coach Bogdan Serwinski who expects another difficult game.

“Dinamo plays better than they did at the beginning of the season; they need points to make it to the next round from a favorable position as we do, so it will be a tough match”.

Dinamo has in the meantime signed one of the best European players, Germany’s Angelina Grün, who paced MOSCOW in a 3:1 win over Crvena Zvezda in Beograd.

“I am not sure that she can make the difference all alone but she certainly brings much experience to the group and she is of course an excellent Volleyball player” says Dutch middle blocker Caroline Wensink.

After losing 0:3 to Tauron MKS DABROWA GORNICZA, Bank BPS Fakro claimed its last match in the national league by routing Impel Gwardia WROCLAW in straight sets and is hence well ready for the big match with Dinamo.