Saint Petersburg, Russia, January 9, 2012. The traditional “Christmas Snow Volley” tournament was organized this past Saturday – in combination with the celebrations for Orthodox Christmas – in the always unique scenario provided by the Sestroretsk resort near Saint Petersburg. 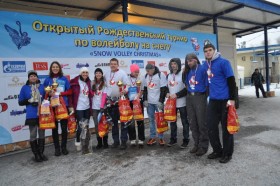 Even though weather conditions were a little different than usual, the event turned into a great success.

This time the tournament should have probably been renamed “Christmas Outdoor Volley” as there is not much snow even in the area around Saint Petersburg this year, so basically the competition was played on sand courts with only little snow.

Some 200 players, for a total of 50 teams representing the Federal City of Saint Petersburg, from the regions of Leningrad, Vologda and Novgorod, plus the Republic of Carelia and Komi joined the event.

Balls and nets were provided by the Russian Volleyball Federation while the Volleyball Association of Northwest Russia distributed gadgets and t-shirts to all participants.

Apart from the Volleyball tournament, additional side events were held there, including rope pulling and another Russian entertainment, called “valenok throwing” (“valenki” are traditional Russian winter footwear).