Roeselare, Belgium, January 9, 2012. Belgium’s Knack ROESELARE will be playing on Tuesday its home match for the quarterfinals of the 2012 CEV Volleyball Cup hosting GC LAMIA of Greece. 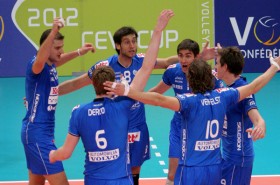 Knack qualified for that stage of the competition with a perfect score of four victories in as many matches in the previous rounds of action with Isku Volley TAMPERE of Finland and the compatriots of Aquacare HALEN.

On the other side GC LAMIA got past Maccabi TEL AVIV of Israel and Montenegro’s Buducnost PODGORICA, there via a golden set.

“We do not have much information about our opponents” says assistant coach Bart Hungenaert.

“We will hence play with much care especially as GC LAMIA has got the advantage of playing the return, and eventually also the golden set, there in Greece. We pay a lot of respect to this club that has got a long tradition in the CEV Cup and Challenge Cup. They have a roster including 9 Greek players plus three foreigners, namely Kovacs from Hungary and Montenegro’s Simeunovic and Curovic” he adds.

Knack comes from three defeats in domestic competitions and therefore a win is much needed also to boost the confidence of the group.