Kazan, Russia, January 9, 2012. Dinamo KAZAN is one of only two teams – the other being RC CANNES – with a perfect record after four rounds of action in the prelims of the 2012 CEV Volleyball Champions League – Women. 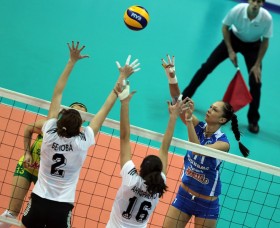 “Even though we have already booked our ticket for the 1/8 finals, we are not going to save energy in the remaining matches” says head coach Rishat Gilyazutdinov.

“It is important to finish first in the group to get a good draw for the next round” he adds.

Regina Moroz top scored with 11 points and Dinamo is currently ranked third in the standings.

Right before the New Year’s Eve KAZAN lost the final of the Russian cup to Dinamo MOSCOW.

As for SOPOT, the team is ranked second in the national league, only one point from leader Bank BPS Fakro MUSZYNA, after losing in straight sets the last game with Aluprof BIELSKO-BIALA.

In the previous match held in Poland Dinamo scored an away win with Ekaterina Gamova totaling 15 points all alone.

“We won in straight sets there but we can not expect an easy game here in Kazan” adds the coach.

“This team is capable of great things and they have the best roster among those of the clubs included in our group”.