Munich, Germany, January 9, 2012. Generali UNTERHACHING continues to dominate its national competitors. The New Year started like the old had ended for Generali UNTERHACHING, i.e. with a win. This time the three-time and defending German Cup winner, who can make it four trophies in a row come March, traveled to MOERSER SC only to pick up another victory. 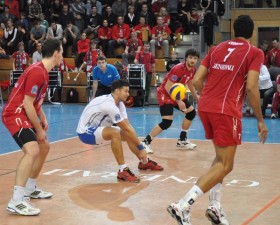 A win is a must for Generali UNTERHACHING

It took Generali all but 46 minutes to go up by two sets.

“We dominated”, Paduretu stated after the match.

All pointed to another victory in straight sets, however, sometimes UNTERHACHING is prone to mental lapses.

That isn’t necessarily a problem for the team pulls together in these situations and usually gets out of it.

This time though Generali couldn’t ignite itself soon enough – and the third set was gone.

“We made too many errors, but then the team stood together” says Paduretu.

UNTERHACHING finally got its rhythm back in the fourth set, and coach Paduretu was all but satisfied that his side had encountered and mastered a difficult situation.

“It was good that we had to fight. It was very good Volleyball. And it was the perfect warm-up for our Champions League match on Wednesday”, he said.

The French (6 points) are one point ahead of the Germans (5 points) after four legs in prelim Pool D.

Should the hosts win convincingly at Generali Sports Arena UNTERHACHING would squander its chances to reach the Playoffs 12 of the 2012 CEV Volleyball Champions League, a narrow loss would leave only a theoretical chance.

However, with a win UNTERHACHING would pass POITIERS and have matters in its own hand on the last day of prelim Pool D against Bre Banca Lannutti CUNEO.

When Paduretu does the math, it sounds like this: “A clear victory against POITIERS and a narrow loss at CUNEO could be all we need”, he says.

That means: 4 points from the last two matches in prelim Pool D.

But first of all UNTERHACHING is concentrating on the visit of the reigning French champion that is back in the CEV Champions League after a ten-year absence.

“It will be difficult to reach the knockout-stage, this is a competition with only top-level opponents” says Generali’s Fredy Cedeno.

The middle-blocker from Venezuela is optimistic, though: “The wins against Jihostroj CESKE BUDEJOVICE have given us a confidence-boost. We can make it”.

Youngster Simon Hirsch adds: “The door to the Playoffs 12 is open just a crack, but with a win on Wednesday we can widen this gap. We must finally deliver in the Champions League what we have shown already against the top teams in the Bundesliga”.

When playing in Poitiers the French made true to the prognosis of captain Max Günthör.

“Poitiers is a big chunk to get out of the way”.

At the end of October that chunk proved to be too heavy – UNTERHACHING lost 1:3 after a superb performance by French national team player Nicolas Maréchal.

Due to stomach problems Generali’s libero Sebastian Prüsener (see picture) had to leave the court and was replaced by Robert Hupka.

“We left behind a big point there. It is annoying that we didn’t even pick up one point”, Hirsch says about the loss back in October.

This time UNTERHACHING is destined to get the big points back.

Belgium: Belgian rookie goes for another great game in Leuven