Belgium: Belgian rookie goes for another great game in Leuven

Leuven, Belgium, January 9, 2012. Belgian rookie Euphony ASSE-LENNIK is ready to host Germany’s VfB FRIEDRICHSHAFEN for the fifth round of action in prelim Pool B of the 2012 CEV Volleyball Champions League – Men. 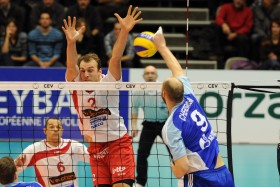 Belgian rookie goes for another great game in Leuven

The first match in Germany ended in a 3:1 win for the guys mentored by Stelian Moculescu with the third set being sealed with the amazing score of 42-40.

If Euphony wants to make it to the Playoffs 12, the home guys will have to take 3 points from the game with VfB which is currently ranked second in the group behind Zenit KAZAN of Russia.

Dutch-born head coach Marko Klok – who played in Friedrichshafen during his career – says his side will be fighting for every point.

“This campaign has already given many emotional moments and valuable experience to our players” he says.

“We are hoping for a full house in Leuven so that we can go for a remake of the great match with Zenit”.

The Belgians enjoyed a good start in the New Year by qualifying for the final of the national cup after scoring two wins over Knack ROESELARE and they are currently ranked second in the national league.

Italy: TRENTINO PlanetWin365 does not take victory over Partizan for granted