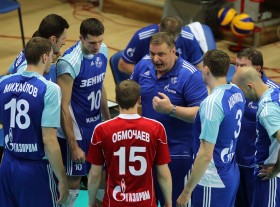 This past October the guys from Tatarstan claimed an easy 3:0 win in Baia Mare and the day shall turn into a splendid Volleyball fiesta at “St. Petersburg” sports hall as the game of Zenit will be preceded by that starring the ladies of Dinamo KAZAN and Atom Trefl SOPOT.

Zenit KAZAN is the sole team – together with PGE Skra BELCHATOW – with an immaculate record in the League Round and has great figures, with 9 wins and no losses, also in the national league, having recently edged also Fakel NOVY URENGOI in straight sets, thereby topping the charts of the Eastern Conference with a margin of 7 points on the closest competitor.

However, the final stage of the Russian Cup held in late December there in Tatarstan turned into a fiasco, with Zenit losing in the 1/4 finals to Belogorie BELGOROD.

The trophy eventually went to Lokomotiv NOVOSIBIRSK that will be representing Russia also in next year’s CEV Volleyball Champions League.

“We have a very tight schedule and can not even dream of real training” says head coach Vladimir Alekno.

“Fortunately we have no serious injuries and Yury Berezhko is gradually getting back to a good shape. He shall reach his peak by the time we play the most important matches” he adds.

Remat ZALAU is a real outsider that has nevertheless improved from last year getting their first points in the competition after losing 2:3 to Euphony ASSE-LENNIK.