Kedzierzyn-Kozle, Poland, January 9, 2012. Zaksa KEDZIERZYN-KOZLE jumped well into the New Year by qualifying for the semifinals of the national cup via the contribution of Czech opposite Jiri Popelka who recently debuted for the Polish club being back to Zaksa after playing there already back in 2003/2004. 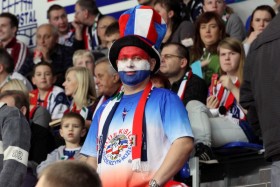 “I am happy to be back; knowing the potential of the team and the quality of the players included in the group I know it won’t be easy to get to the starting six” says Popelka, “but this is also an additional motivation to perform well”.

Zaksa is currently preparing for the home game with Spain’s CAI TERUEL and will be missing middle blocker Patryk Czarnowski who is injured.

“We need a convincing win to bring back some optimism after the defeat we suffered to TRENTINO” says club manager Kazimierz Pietrzyk.

This game will be a good test to see where Zaksa stands before the top game coming up on Sunday in the national league against PGE Skra BELCHATOW.