Vantaa, Finland, January 10, 2012. LP SALO is most probably one of the teams with the longest winning streak out there in the Volleyball arena having claimed a total of 102 consecutive matches by combining Finland’s national league and national cup. 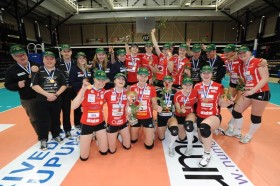 LP SALO has not suffered any domestic defeat in the past three years with the series starting in February 2009.

Although they have not been as successful in the European Cups, still they have been able to take 90 matches in a row in the national league plus 12 from the national cup.

“As we were about to claim match 100, yes, we had some thoughts in our minds but during the cup final we did not think at all about our winning streak” says setter and team captain Riikka Arminen.

The next game is coming up already tomorrow as LP SALO hosts Smart Allianz STUTTGART for the 1/8 finals of the 2012 CEV Volleyball Cup.

Isku Volley is currently ranked second in the national league while ROVANIEMI sits in fourth place.

They are both still competing in the 2012 CEV Volleyball Challenge Cup with their next opponents being there Olympiacos PIRAEUS of Greece and Pokka A.E. KARAVA of Cyprus.